Back in the day, I used to find reading really boring. That all changed when I bought my Kindle about four years ago, and it rekindled (ha, get it?) the love of reading I had when I was a child. All the escapism, joy, and wonder of getting lost in a book came flooding back and I’ve not looked back since. So, here are ten books I’ve been loving recently: 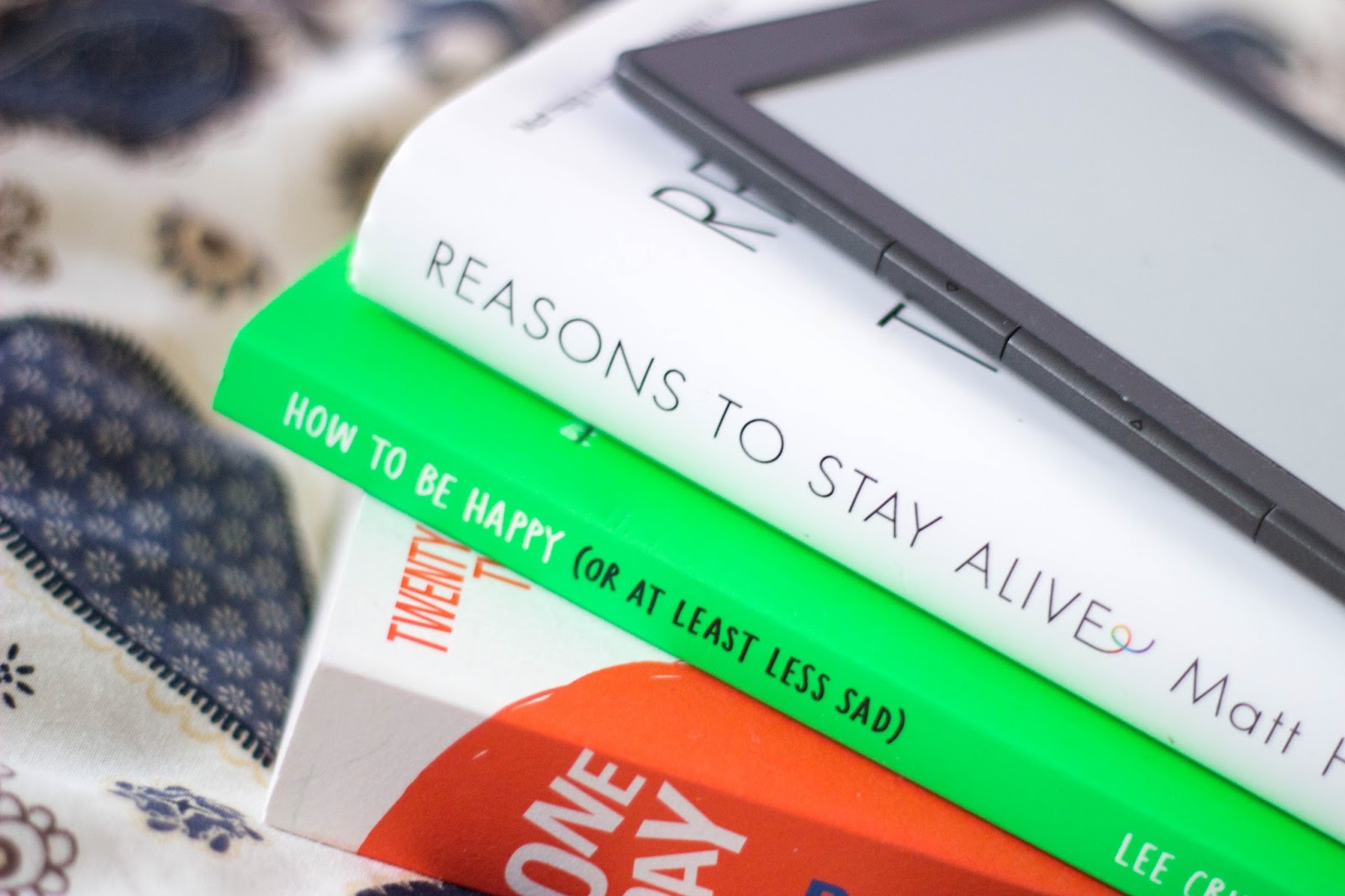 If you follow me on Instagram, you might have seen this creep into my feed a couple of times. I’ve read it at least twice, maybe even three times in the past year or so, and it’s probably one of my favourite books of all time now. The book details Haig’s breakdown at the age of 24, and how he eventually managed to piece his life back together after debilitating anxiety and depression led him to move back home and put his life on hold.  It’s a harrowing read at times, but it shows that there really is light at the end of the tunnel. This book is a must-read for anyone who’s suffered from depression or is curious to know what it’s like. 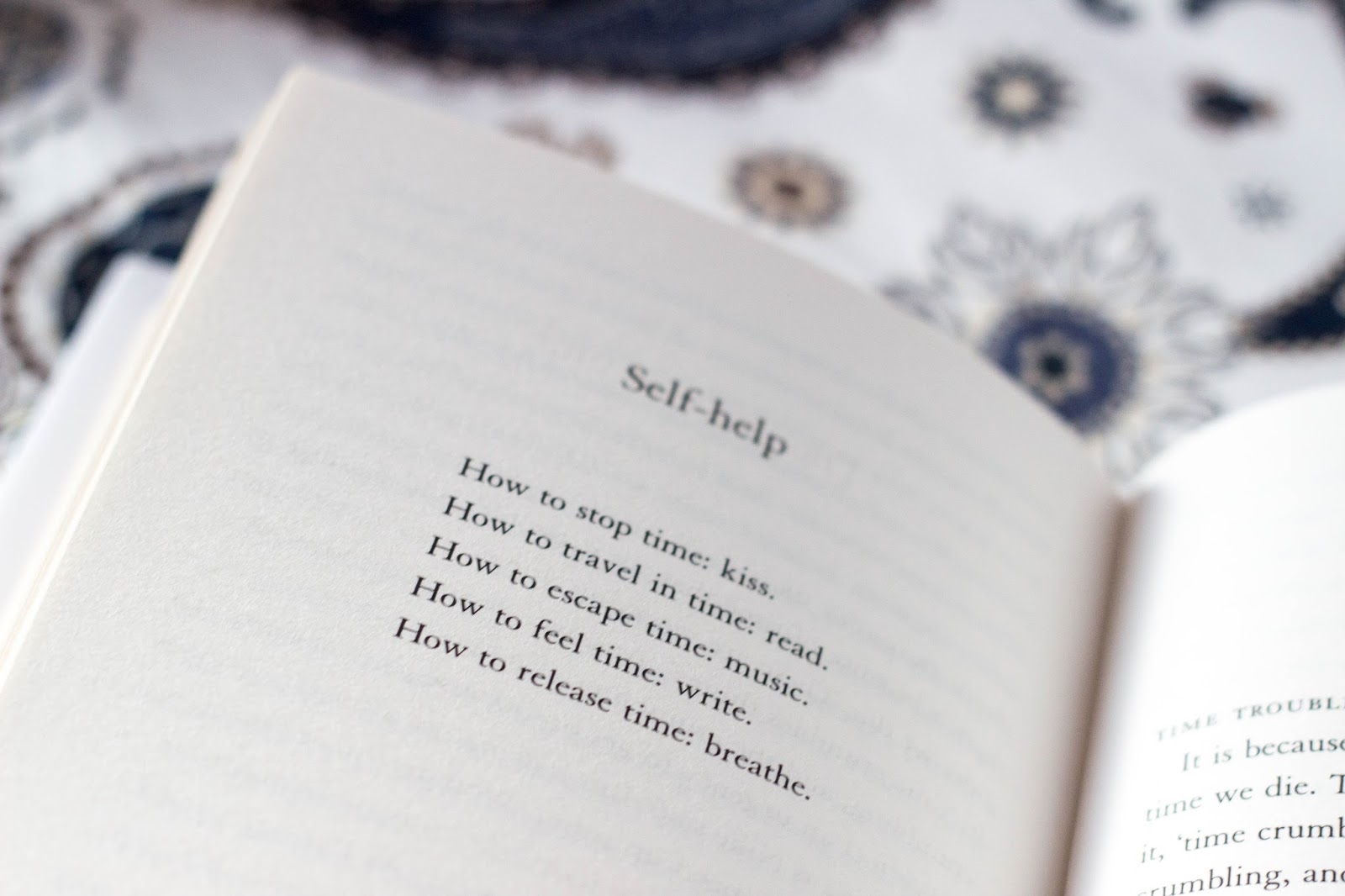 One Day by David Nicholls

Oh, the twist at the end of this book! I don’t want to spoil it for you, but it’s seriously tragic. I had a scriptwriting lecturer at Uni who taught us that you should imagine your characters in a tree, and you have to throw enough rocks at them to make them almost fall out of the tree, but not quite. Nicholls certainly does that with this book. You definitely don’t get the happy ending you’re yearning for.

The book follows Emma and Dexter for 20 years on every St. Swithuns Day after they meet at their graduation. It’s certainly relatable for recent graduates when both their lives don’t turn out how they expected over the course of the book. You might need some tissues towards the end though, that’s all I’m saying.

There’s only one way to describe this fantastic book: A BEAUTY BIBLE. Sali Hughes really knows her stuff and this book is just full of great tips on skin care for all ages, makeup, and there’s even a chapter on beauty routines through illnesses like cancer. It’s got such a wide appeal because there’s something for everyone, whether you’re young or old, have dry skin or oily skin, like bold makeup or prefer to keep things natural and understated. Absolutely no-one’s left out. I read it on my Kindle, and I’m even quite tempted to buy the hardback version just so I can use it for reference for years to come. She’s also writing a new book that’s out later this year, all about iconic beauty products, which I’m very excited about!

This book’s definitely worth buying, whether you know a lot about makeup, or if you’re a novice looking to gain more knowledge. Buy it, you won’t regret it!

nsari goes on a quest to find out how much romance and our love lives have changed over recent decades, with the advent of the Internet and the world being more connected than ever before. He goes across the world to interview people from various cities to get a global take on how much modern romance has developed. The book even offers reassurance that you’re not alone in feeling frustrated and bemused because an awful lot of other people are too. It’s an amusing, and very interesting read, whether you’ve got much of a love life or not. 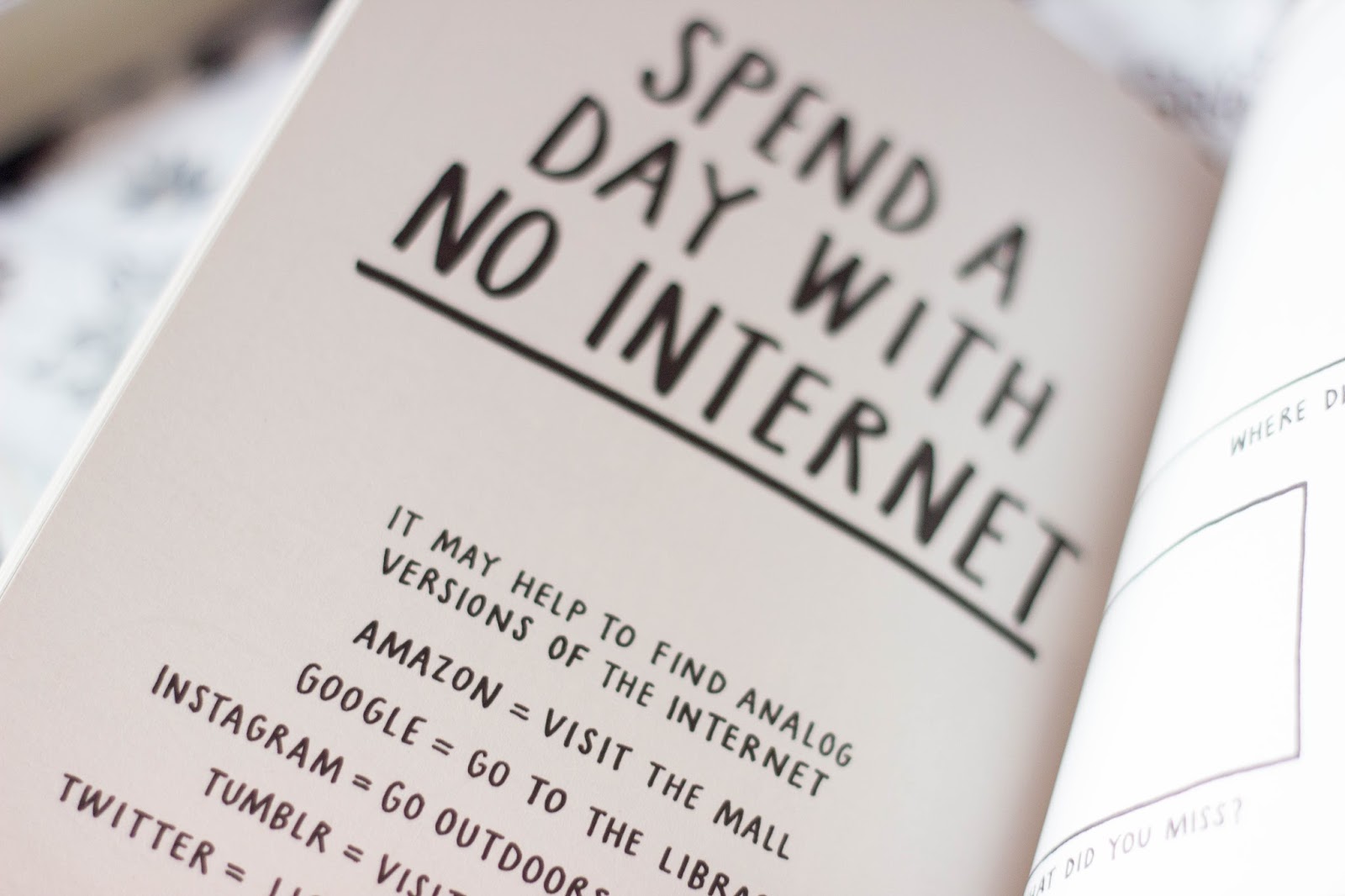 This is a workbook on how to focus on the positives in life, and generally being happier. The picture above is from this book, and so is the one below. It’s also bright green, so it certainly jumped out at me on the shelves in Waterstones.

It just serves as a great, and colourful, reminder that not everything you’re worrying about is that important. There’s more to life than social media and any other trivial things that you might be overly concerned about. The creative and very simple nature of the book really helps to combat the blues, and definitely comes in handy on a bad day. If you’re after something to remind you life’s not as bad as you might think, give this gem a try.

The Last Act of Love by Cathy Rentzenbrink

Okay, so this really isn’t the happiest of books. It’s a true story about Rentzenbrink’s brother, a straight-A student, who was hit by a car just before results day and consequently left in a Persistent Vegetative State. It follows Cathy and her parents as they come to terms with the injuries that Matthew’s sustained, and how they begin to realise he’ll never recover and be the same person he was before. It’s very sad, but definitely a worthwhile read if you need a reminder that life’s precious and not as bad as you might think.

The Lady in The Van by Alan Bennett

So I’ve not seen the film, but I thought I’d read the book instead. It’s a true story, based on Miss S, who lived in a van in Bennett’s garden for several years. The book follows a gradual decline in her health, until her death. Again, not the happiest of books, but she’s certainly a formidable character and it’s worth reading for that alone. It’s also quite a short read, so is great for travelling or as a holiday read too! 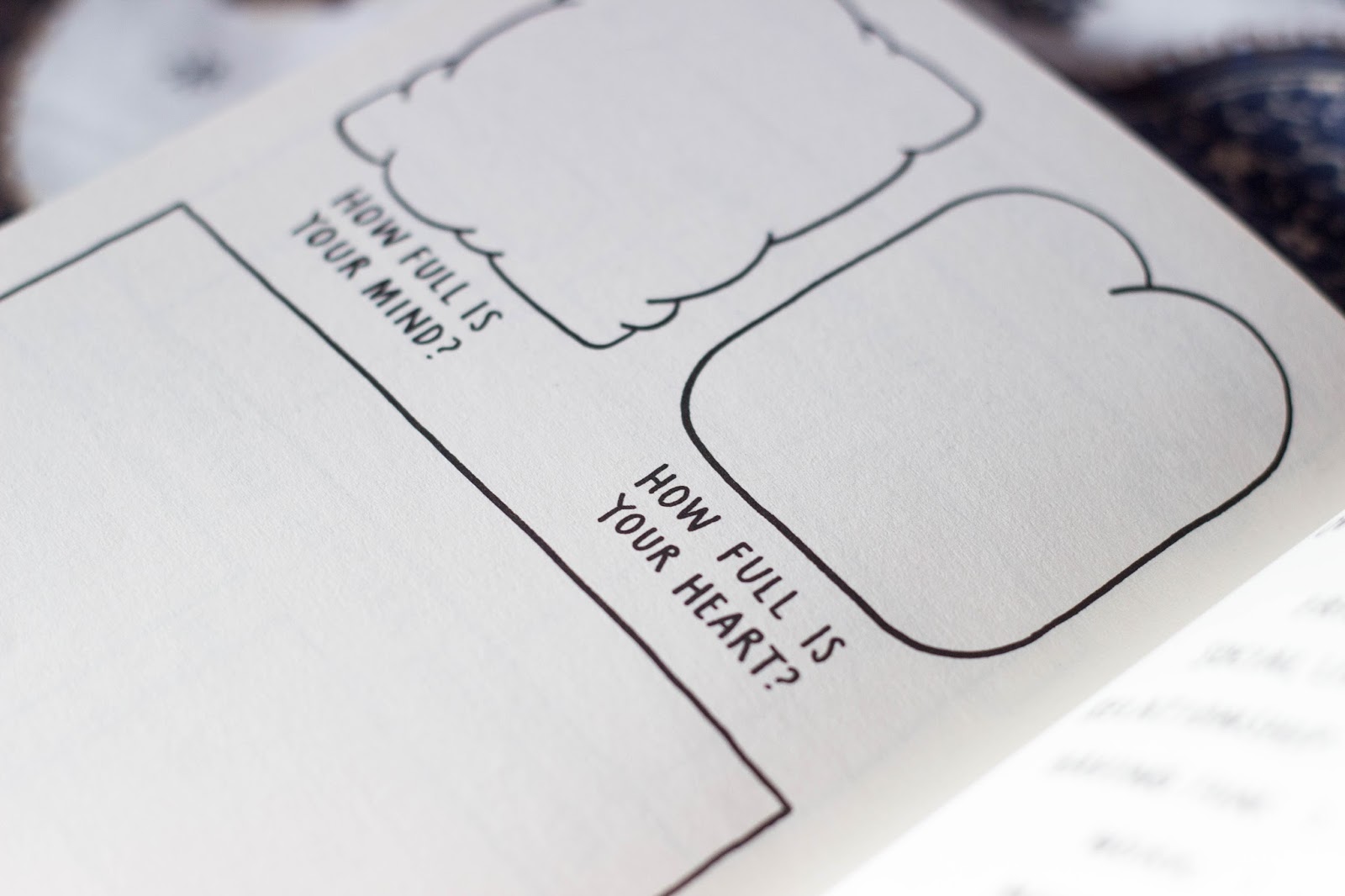 An oldie, but a goodie! It’s not the first time I’ve read this book about a thirtysomething in London torn between the slightly pompous lawyer Mark Darcy or her smarmy boss Daniel Cleaver (I’m on #TeamDarcy in case you were wondering.) Anyway, I’m sure you don’t need me to recap the plot of this popular book, do you? To me, the first book’s the best out of the three. Despite the fact it was written in the nineties, some aspects are still pretty relevant to women today. (Who else is excited for the third film that’s released later this year too? I can’t wait!)

It’s Not Me, It’s You! by Jon Richardson

Seriously single? Yeah, me too, and so was Richardson when he wrote this memoir, focussed on juggling misanthropy with extreme lonelinesss. Again, it’s not the first time I’ve read this book, all about his quest to try and tolerate other human beings in a bid not to die alone. If you don’t know of him, he’s a comedian, so the book’s pretty amusing, but you’ll definitely relate to it if you’re a misanthropic singleton.

You end up feeling sorry for him but also really root for him; it’s clear despite the fact he hates most people, he’s not happy being alone. Definitely an entertaining read for someone who’s looking for something a little lighter this summer.

Girl Up by Laura Bates

Bates is the founder of the Everyday Sexism project, and this is her second book all about sexism and gender equality. In all honesty, at 24, I think I’m probably a bit old for this book; but that doesn’t mean to say that I’m not learning valuable stuff from it! I’m just over halfway through it. So far it’s had some fantastic advice such as how to deal with certain aspects of sexism: like catcalling, and inappropriate touching from strangers.

It’s the kind of book I really wish had been written about ten years ago because it would’ve come in handy back then. If you’re a teenager or even a young woman, I’d definitely invest in this book. The illustrations are great and Bates has such a disarming and amusing writing style that she’ll definitely keep you entertained.

What books have you loved recently? Let me know in the comments, so I can add them to my reading list!

Enjoyed this post? You might also like: A Bit of a Nightmare, Lady Betty Afternoon Tea at Bettys, or maybe even 3 Books I’ve Been Loving This Month.

The Weekend Edit: Your Body
The Weekly Playlist

A Nosy At What’s On My Summer Reading List

The Happy List – Plus A Bit of a Catch-Up Too!