My name’s Katie and I’m addicted to my iPhone.

I don’t have clear boundaries with technology these days. I’ve owned an iPhone of some description or another for eight years, and before that, I had a BlackBerry. Especially since getting my hands on an iPhone 4 back in 2011, I’ve struggled to draw the line on how often I pick my phone up and use it. It’s incessant. Like most people these days, I seem to have an addiction to my smartphone.

Last year, I tried reading How To Break Up With Your Phone by Catherine Price and I got as far as the exercises where you have to actually do the work to ‘break up’ with your phone before I panicked and put the book down to return to at a later date. (Now, perhaps?)

Ironically, I started writing this blog post the weekend before last, when I was in the middle of my first iPhone-free weekend in nearly a decade. Then, last week, a study about ‘smartphone addiction’ made the news. It couldn’t have come at a more pertinent time for me!

When I first started thinking about my own problematic phone usage, I took this test and scored a whopping 13 out of 15. (Most people get over 8 which is the threshold score for ‘addiction’; a result so damning that it tells you that you should probably seek help from ‘a psychiatrist or a psychologist who deals with addiction issues.'(!))

Why I’m in desperate need of a digital detox

I had a digital detox back when I was on a busy work placement a few years ago, but I soon slipped back into bad habits. Having a smartphone, I’ve realised recently, has started to really negatively affect me in several different ways.

I can’t watch a TV programme in full (even a twenty minute episode of Friends) without the urge to pick up and scroll something or search for something that can definitely wait until later. My attention span is that abysmal these days. I’ve even struggled with ten minute long YouTube videos, which is atrocious.

I can’t travel on public transport, or wait for someone in a cafe or coffee shop, without getting sucked into my phone – whether it’s watching peoples’ Instagram stories, or checking emails for the fifteenth time that day, or even reading the news that can wait until later, I can’t help but pass that time that I used to spend daydreaming, eavesdropping on strangers (come on, we all did it), or just staring out of the window, looking at my phone instead.

Catch a train, look up from your phone, and look around you – what can you see? Nearly everyone on their phone, a tablet or a laptop.

(Oh, and that’s not to mention that my little finger has genuinely bent because of the weight of my phone resting on it! This is probably the most disconcerting development I’ve had so far when it comes to owning a smartphone. The fact that it’s literally disfiguring me…)

I can’t stick to the boundaries that I’ve tried to impose on myself over the past eighteen months or so either. It’s so much harder than it sounds to ‘leave your phone at home’ while you go for a walk – what if you get murdered?! What if you fall down a well and Lassie isn’t there to help you?! What if you get lost and you actually have to ask another human for directions instead of using Google Maps?! – or to switch the thing off for an entire weekend and stick it in a drawer. That was my latest plan, of which I initially failed so miserably that my iPhone never made it into the drawer in the first place…

Looking at my Screen Time app before I started my digital detox, I pick my phone up on average 44 times a day, and spent an average of 3 hours and 8 minutes staring at it daily.

It’s way too much time that could be better spent doing something genuinely productive, instead of something that might feel productive initially but ends up leading you to getting sucked into a time-consuming vacuum of nothing-that-important-ness.

There’ve been times in the past year or two where I’ve spent 6 and 7 hours on my phone. Mainly thanks to Instagram. After those days, I genuinely feel frazzled, miserable, and worse-off after finally putting the phone down. It isn’t good for me. It isn’t good for you either. But putting the thing down is so much easier said than done, isn’t it?

So, what have I done to try and curb my smartphone addiction?

I went back to basics.

It’s just like the phones that seemed so ‘high tech’ when I was a kid. (When phones were exciting rather than a time-consuming drain on your existence.)

The Nokia 105 has the ability to call and to text, and that’s just about it.

Except for Snake! (Yes, I’ve already played it. Of course I have, that’s probably my next tech addiction, isn’t it?) Oh, and an FM radio, a torch, and an alarm.

No camera. No browser. No emails or social media. Bliss.

I’ve got a free pay as you go SIM card from Asda Mobile for it – don’t laugh, it’s the cheapest deal I could find. (I had to order a new one because the SIM card slot is a different size to the iPhone one). A fiver will get you more than enough minutes, unlimited texts, and 500mb of data that you can’t use because the phone doesn’t have a browser on it.

The perks of having a ‘dumb’ phone

I’m planning on using the Nokia at weekends, for now at least. I’ve started referring to it affectionately as my ‘weekend phone’, which sounds terribly middle class. It’s the whole ‘chucking my iPhone in a drawer for the weekend’ plan but reimagined.

One of the main worries about abstaining from my iPhone for a while every week was thought of being stuck in an emergency situation without a device to get me out of any trouble. This Nokia 105 is the perfect emergency phone.

It has a standby battery of A MONTH. (A staggering fact to someone who usually ends up charging her iPhone XR twice a day.) It can call people. It can text people (with a T9 keyboard, which I surprisingly re-adapted to very fast). It’s a phone. It’s just a phone, with buttons instead of a touch screen! A phone that doesn’t demand my attention for unnecessary information. One that doesn’t throw stuff at me like worrying headlines from news apps, or notifications that can wait. It’s just a phone.

It’s also WAY smaller and lighter than my massive iPhone, as you can see. I’m actually excited to use it, and to be free of the clutches of social media and notifications for a while.

Who’d have thought in 2000 when we were besotted with our original Nokia 3310s that we’d become exasperated with carrying a mini computer around all day and end up longing for those days of simplicity?

I’ve been a slave to my phone every day for years now, and I really need to take back some control over my life.

What my first weekend without a smartphone in eight years taught me:

So, yes, it’s quite a drastic digital detox that I’m having at the moment.

Up to now, having a regular break from your smartphone like this is something that I’d highly recommend. (If you can.)

I know that it’s quite a privileged thing to do, to be able to afford a second phone, even though it’s a very cheap one, nonetheless. I know that there are also people who genuinely can’t get away from their phones for myriad reasons: whether it’s their job that doesn’t allow that freedom or other circumstances that mean they need their smartphone at their side constantly.

I know that I’m lucky to give this a try, but if you can too, I’d definitely recommend trying it – even if you can only afford to go ‘phone-free’ and don’t get a cheap backup phone.

It’s so refreshing to be able to shove it in a drawer for a couple of days and get on with your life.

What do you think about this? Is it too drastic or something that you’d consider doing too? 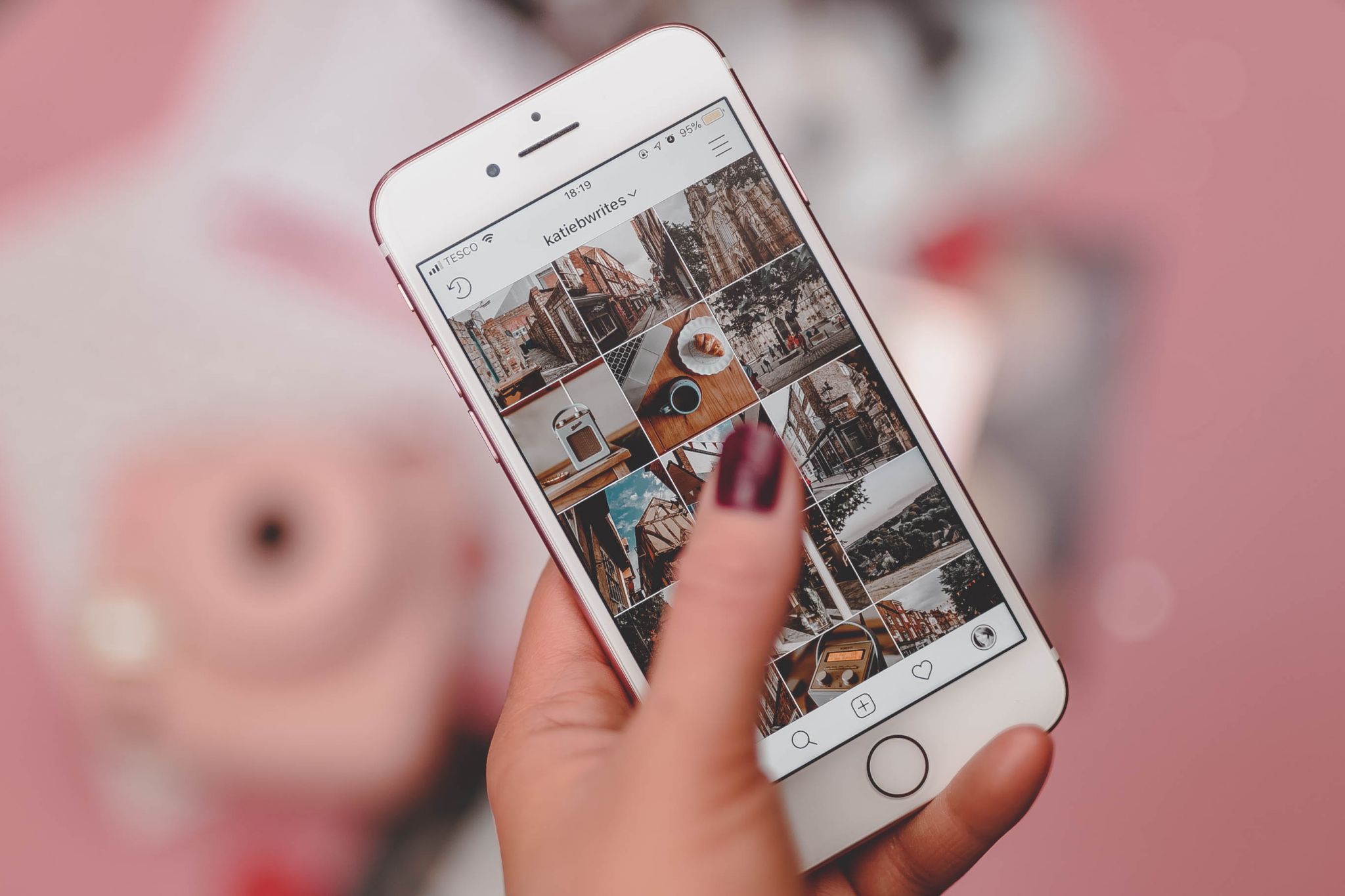 Killing Off Blogs, Bots & The Algorithm: Some Issues I Have With Instagram

The Tricky Art of Letting Yourself Take a Break